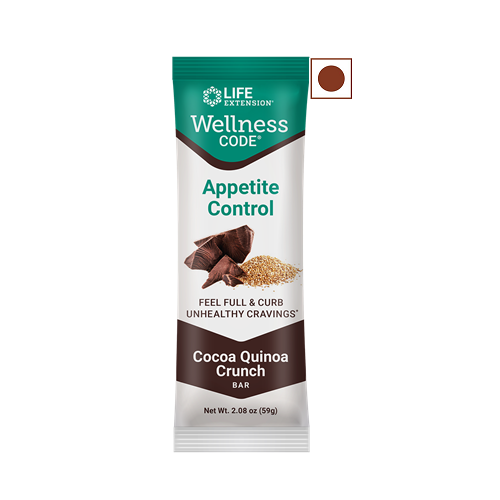 Wellness Code® Appetite Control Bars aren’t your typical snack bars, packed with sugar and empty calories. They are made with a clinically studied spinach extract that has been shown to reduce cravings, especially for sweet and salty foods. But don’t worry: It doesn’t taste like spinach at all. So leave the vending machines alone. Our Wellness Code® Appetite Control Bar: Cocoa Quinoa Crunch is the perfect guilt-free snack for you!

Raw spinach contains compounds called thylakoids. These compounds bind to dietary fats and delay the emptying of stomach contents into your lower digestive system. This in turn triggers appetite-suppressing hormones. These hormones promote satiety and support against your urge to snack.1

But thylakoids are usually found between the indigestible walls of plant cells.1 So our Appetite Control bar contains a thylakoid-enriched extract derived from spinach to make these compounds more bioavailable (and makes the bar much tastier than raw spinach).

Clinical evidence is promising: In a double-blind, placebo-controlled study, 22 women took a single dose of 5 grams of Appethyl® extract in the morning, along with a healthy breakfast. Compared with placebo, Appethyl® supported against cravings for all snacks during the day by 36 percent; for sweet and fat snacks, also by 36 percent; and for salty snacks by 30 percent. Feelings of fullness were increased by 14 percent, and hunger was reduced by 21 percent.1

In other studies, Appethyl® taken with meals or snacks supported against hunger and food cravings compared with controls.

These statements have not been evaluated by the Food and Drug Administration.
These products are not intended to diagnose, treat, cure, or prevent any disease.

Save this product for later
Display prices in: INR